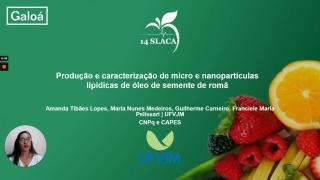 Resumo
Pequi oil is a very popular oil extracted from the Pequi fruit (Caryocar brasiliense), commonly found and consumed in the Brazilian Cerrado region and some other Central and South America countries. Pequi oil fractions is normally obtained during storage, highlighting the possibility of a fractionation process in which specific fractions can be obtained. This work was aimed at simulating the fractionation of Pequi oil using the classical solid-liquid thermodynamic (SLE) equilibrium theory. Oil thermal behavior was evaluated in DSC and its Solid Fraction Curve (SFC) calculated by DSC data. SFC was adjusted by SLE equation. Margules model was used for calculation of the activity coefficients (AC). Triacylglycerol (TAG) composition was taken in the AOCS Lipid Library and TAG melting properties in the TAG Properties Calculator (AOCS Library). Calculation was performed using a SLE isoenthalpic flash algorithm implemented in MATLAB. Margules model was essential for the best modeling accuracy, avoiding that oil melting point (close to 20°C) was overestimated (in more than 40°C). Between -10 and 5°C the solid fat fraction varied from 60 to 40%. In this range, interesting fractions could be obtained. At -10°C a liquid fraction rich in POO and OOO can be obtained, the main TAGs found in Olive Oil. At 5°C the solid fraction is rich in POP with a minor percentage of SOS, the main TAGs in Cocoa Butter (CB). At 0°C and -10°C the POS composition increased in the solid fraction, which is also a CB TAG. Simulation provided a very accurate adjustment of the SFC curve, showing also that its possible obtaining Pequi oil fractions, both liquid and solid, at some temperatures with interesting compositions. Fractions TAG profile was quite like other commercial oils and fats, highlighting that they could be used in the formulation of food products.
Questões (11 tópicos)
Pergunta 4Elogio 5Sugestão 2