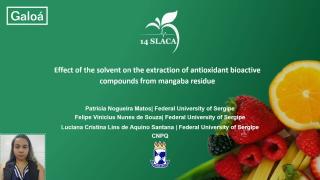 Beauregard sweet potato is a biofortified food, well known for having orange pulp and being rich in bioactive compounds. The intensive use of pesticides has generated food safety risks, especially in Brazil, one of the first in the world ranking. In this context, this work aimed to evaluate the presence of pesticides in the elaborated Beauregard sweet potato flour, through qualitative and quantitative analysis by QuEChERS method and Gas Chromatography coupled to Mass Spectrometry with two types of analyzers (Ion Trap and Quadrupole). A multiresidue method was used to determine four active ingredients of pesticides. Qualitative chromatographic analysis showed that six major compounds were identified, including two phytosterols: Campesterol and γ-Sitosterol, which due to their similar chemical structure and function to cholesterol, significantly contribute to human health. Two aromatic compounds were identified: β-ionone and 2[4H]-Benzofuranone,5,6,7,7,a-tetrahydro-4,4,7,a-trimethyl these compounds are complex, volatile, lipophilic substances present in essential oils. Other compounds identified were: Thunbergol, considered a diterpene alcohol, important antimicrobial agent alone, or combined with other compounds, and the Pentanoic acid 5-hydroxy-, 2,4-di-t-butylphenylesters is an unsaturated fatty acid that has benefits to human health. In the quantitative analysis, four active ingredients authorized for the crop, according to National Health Surveillance Agency (ANVISA) were studied: Lambda-cyhalothrin, Kresoxim-methyl, Pyriproxyfen and Boscalid. Any of these compounds was found, therefore, it is considered a safe food. Linearity was satisfactory with R2 > 0.99. The recovery varied between 83 and 114%, being acceptable by SANTE/12682/2019 Guidelines (European Comission). The relative standard deviation (DPR) remained < 12%, being acceptable for the analyzed level. The LOQ found for each active ingrediente was below the MRLs established by ANVISA and European Comission. Thus, the prepared and analyzed sweet potato flour proved to be a food that presents health benefits and is free from toxic residues, being considered a safe food.