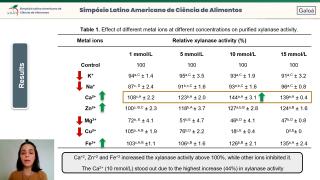 Chicken meat is the most consumed animal protein source in the world and this high production results in large waste generation. These residues, when not disposed and treated properly, can cause serious environmental damage. Due to its rich organic content, chicken wastes have been used in the production of flour, animal feed or compost. Among the potential alternatives to add greater value to these substrates, the microbial fermentation has been extensively explored, since microorganisms have the ability to grow in this material and produce a several biomolecules with multiple applications in pharmaceutical, food, cosmetic and other industries. Thus, the objective of this work was to use a chicken viscera flour as substrate for the production of proteases and bioactive peptides, through solid state fermentation (SSF) using the filamentous fungus Aspergillus oryzae IOC 3999. An experimental design was carried out to verify the influence of the variables: amount of inoculum (spores/g), moisture (%), and incubation temperature (°C) using as response variables the protease activity and ABTS, DPPH and FRAP antioxidant properties. For proteases production, only moisture was the statistically significant (p-value < 0.10) variable with a negative effect. The highest protease production was detected in assay conducted with 44% as initial moisture, incubation temperature of 27°C and inoculum of 2˟10^6, reaching 501.39 U/g. For the antioxidant properties measured by ABTS, DPPH and FRAP, although some variables showed statistical significance, the moisture was unanimous and showed a negative significant effect in all methods. The highest antioxidant activities detected were 401.08, 157.92 and 300.47 µmol of Trolox equivalent/g of protein, for ABTS, DPPH and FRAP, respectively. The results showed that the chicken viscera flour can be used as substrate for SSF allowing the production of high value-added metabolites.