PRODUCTION AND CHARACTERIZATION OF MICRO AND NANOPARTICLES OF POMEGRANATE SEED OIL

PRODUCTION AND CHARACTERIZATION OF MICRO AND NANOPARTICLES OF POMEGRANATE SEED OIL 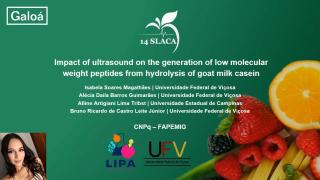 Pomegranate seed oil (PSO), obtained from the cold pressing of the seeds of the pomegranate (Punica granatum L.), has been gaining attention due to its beneficial effects on health, associated with its rich composition in conjugated linolenic acids and antioxidant, anticarcinogenic, antiatherogenic and anti-diabetes properties. The use of this oil by industry is limited by the low aqueous solubility and the high possibility of oxidative degradation of compounds, limitations that can be overcome through the use of encapsulation techniques. The objective of this work was the production and characterization of lipid micro and nanoparticles of PSO, in order to take advantage of the functional properties of this oil. The nanoparticles were produced by the hot homogenization method followed by sonication and the first method was associated with ultra-turrax to obtain microparticles. The micro and nanoparticles were characterized by mean diameter, polydispersion index (PI), zeta potential (PZ), infrared spectroscopy (FTIR), X-ray diffraction (XRD) and microparticle morphology was evaluated by scanning electron microscopy (SEM). The formulations of nanoparticles had an average diameter in the nanometer range (308 to 325 nm), while the microparticles had spherical morphology and diameters in the micrometer range (9.45 to 10.84 μm), demonstrating the effectiveness of the methods for obtaining the particles. The PI values found for the nanoparticles (0.26 to 0.39) indicate the achievement of homogeneous and monodisperse formulations. Microparticle suspensions were considered polydispersed. High absolute values of PZ (-25.1 to -45.3 mV) were found, indicating stability of colloidal dispersion of the formulations. The DRX and FTIR analyzes showed the compatibility between the components of the particles and the maintenance of the PSO characteristics even after heating. In general, the methods used were efficient for the production of PSO micro and nanoparticles with great potential for future applications in active packaging.