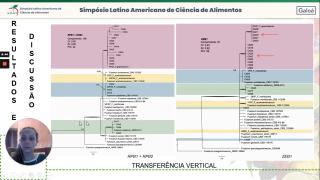 Antimicrobial packaging comprises an innovative food preservation technology. However, little is known about the possibility of this packaging triggering stress response on microorganisms. Therefore, this work aimed to investigate the occurrence of injury and homologous resistance (resistance to the same stress) in Listeria innocua after exposure to active films containing garlic essential oil (GEO). The minimum inhibitory concentration (MIC) of GEO against L. innocua and the occurrence of GEO resistance after exposure to sublethal concentrations were verified. After, L. innocua was exposed to cellulose acetate films containing 0% (control), 1% (F1), and 10% (F2) of GEO (w/w). The inoculum was pour plated on Tryptic Soy Agar with yeast extract (TSAYE), and the films were placed on the solid agar. The plates were incubated at 37 ºC/24 h and 7 ºC/10 days. Subsequently, the agar was weighted, homogenized, and the serial dilutions were plated on a rich medium (TSAYE) and a selective medium (Listeria Oxford agar). The plates were incubated at 37 ºC/24 h. Colonies from each plate were selected for MIC reassessment. The MIC of GEO against L. innocua was 159 µg.mL-1. When exposed to 1/2 MIC, 1/4 MIC, and 1/8 MIC, no occurrence of homologous resistance in L. innocua was found. When exposed to the films and incubated at 37ºC for 24 h, no injured cells were verified, although the film F2 achieved a log reduction of 1.7 while F1 caused a log reduction of 0.9. After 10 days at 7 ºC, the film F1 caused a log reduction of 4.3, and injury was verified when cells were exposed to film F2 (log reduction of 6.1 and 85.5% of injured cell population). No occurrence of homologous resistance was found after exposition to the films regardless of the incubation period, which is an important find to the food industry.