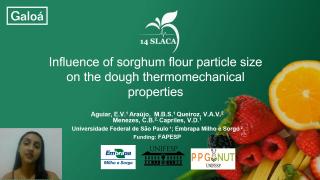 Fermented meat sausages inoculated with probiotics are foods with functional claims that can bring benefits to the consumer's health. In this sense, the objective was to evaluate the growth and viability of probiotic bacteria when inoculated into a salami sausage. Two formulations of salami sausages with chicken meat were developed with lactic probiotic cultures Lactobacillus casei (L1) and L. paracasei (L2), separately. The starter cultures Staphylococcus xylosus and Pediococcus pentosaceus were used for salami production. After the salami maturation and fermentation period under controlled conditions of temperature and relative humidity for thirty days, microbiological analyzes and the viability of the probiotics were carried out according to current legislation. The counting of lactic bacteria was carried out at 0, 15 and 30 days after salami production. As a result, sausages S1 and S2 were absent for Salmonella/25 g. In the evaluation of Staphylococcus spp. the values obtained were: S1 of 2.81 x 105 CFU/g and S2 of 2.58 x 104 CFU/g, however absence of characteristic colony of S. aureus. In the control of Escherichia coli, 23.2 NMP/g (S1) and 12.6 NMP/g (S2) were listed, values that comply with the legislation. As for the viability of lactic acid bacteria, sausage S1 (L. casei) presented a growth with values of 9.6 x 108 CFU/g on day zero and 2.5 x 1013 CFU/g on day thirty, while sausage S2 (L. paracasei) the count remained constant at the magnitude 108. We can characterize that the probiotic L. casei (S1) presented better stability in the sausage matrix, compared to L. paracasei (S2), but both fermented sausages have high counts of lactic acid bacteria (>108 CFU/g). The results showed that it is feasible to inoculate probiotics in meat sausages with being able to be characterized as products with functional claims.