EFFECT OF MONOVALENT AND DIVALENT SALTS INCORPORATION ON ACTIVE FILMS

EFFECT OF MONOVALENT AND DIVALENT SALTS INCORPORATION ON ACTIVE FILMS 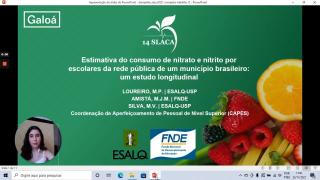 The generation of plastic waste has been boosting research on the development of sustainable polymers, which can also be applied as polymeric matrices for active films with antimicrobial properties. In this context, the present work aimed the investigation of the effect resulting from the incorporation of a monovalent salt (LiCl) and a divalent salt (MgCl2) on the antimicrobial activity of methylcellulose (MC) films containing nisin. The films were elaborated by the casting method with 2% of MC (w/v) and 15% of nisin (w/w based on polymer mass). The salts were added in different concentrations each to achieve 25, 50, 250, or 500 mM of ionic strength (IS). After, mechanical properties were investigated, as well as the intra- and intermolecular interactions in the films by attenuated total reflectance Fourier transform infrared spectroscopy (ATR-FTIR), and the antimicrobial activity of each film was analyzed by the agar diffusion method against Escherichia coli and Staphyloccocus aureus. FTIR spectrum showed that, regardless of the salt, the greater the IS, the greater the peak intensity near the band at 3350 cm-1, related to –OH groups, and between LiCl and MgCl2, LiCl-added films presented a more intense peak at 3350 cm-1. Regarding the microbiological test, MgCl2-added films showed activity against S. aureus only, with an inhibition zone of 20.9 ± 1.1 mm, while for LiCl-added films, the inhibition zone was 20.5 ± 0.7 mm. Against E. coli, only the LiCl film with 500 mM of IS showed antimicrobial activity (11.3 ± 0.4 mm) due to the greater plasticizer effect. This plasticizing effect promoted by IS was proven from uniaxial tensile tests. Therefore, it is concluded that IS emerges as a new tool, until then not reported in the literature, to enhance the dispersion of additives in the polymer matrix, significantly improving their antimicrobial activity.