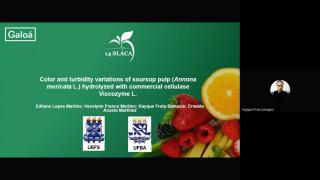 Lentil (Lens culinaris) is a high nutritional value legume and its consumption has been associated with several health benefits. Enzymatic hydrolysis is commonly used to release antioxidant peptides from various protein sources. To expand the application possibilities of protein hydrolysates containing bioactive peptides, it is necessary to understand the effects that processing has on the biological properties of these hydrolysates. Therefore, this study aimed to evaluate the impacts of different processing treatments (ultrasound, heat treatment at 75°C and 90°C, and microfluidization), applied before and after hydrolysis, on antioxidant properties of lentil protein hydrolysates. Determinations included: ABTS- and DPPH- radicals scavenging, FRAP, Total Antioxidant Capacity (TAC) and the electrophoretic profile of the protein concentrate (control) and hydrolysates. As pre-treatments, the processes resulted in a significant increase (p < 0.05) in antioxidant activity compared to untreated samples: 59% (FRAP) processed by ultrasound, 50% (FRAP) treated at 90 °C and 36% (DPPH) for samples treated by microfluidization. These results are probably related to partial unfolding of protein structures, exposing more hydrophobic areas and increasing regions available for enzymatic cleavage. When the processing treatments were applied after hydrolysis, significant reductions (p < 0.05) in antioxidant activity were observed: 20% (ABTS), 30% (DPPH) and 27% (TAC) for treatment at 75°C; 22% (DPPH) for treatment at 90°C; 36% (DPPH) and 30% (TAC) for ultrasound; 23% (ABTS) and 19% (TAC) for microfluidization. These reductions may be associated with protein aggregation or even degradation of residual antioxidant compounds present in the protein concentrate. On the other hand, for the FRAP method, the lentil hydrolysates showed a 3-to-8-fold increase in their antioxidant activity upon application of post-treatments. Electrophoresis indicated a similar profile for all hydrolysates, regardless of the process applied previously or subsequently. In general, pre-treatments had a positive response and post-treatments resulted in reduced activity.