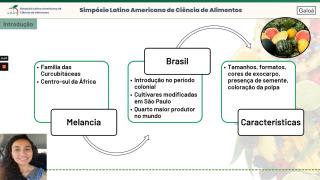 YELLOW-FLESHED WATERMELON SEEDS AS A SOURCE OF LIPOPHILIC NUTRIENTS
Detalhes

Resumo
Abstract: Papaya (Carica Papaya L.) is an important fruit for the Brazilian agricultural sector but suffers significant losses in production due to its high susceptibility to fungal diseases. Antimicrobial nanoparticles have been studied as an alternative use of conventional methods for postharvest diseases control. In order to evaluate, in vitro, the antifungal potential of zinc oxide nanoparticles (ZnOnano) (<50 nm, Sigma Aldrich), against Colletotrichum gloeosporioides and Fusarium spp., microdilution in broth was used to show the minimum inhibitory concentration (MIC). The fungal inoculum was prepared adjusting the final concentration adding malt extract broth (MEB) (2.0 x 105 and 3.5 x 105 conidia. mL-1 for C. gloeosporioides and Fusarium spp., respectively). Microdilution was performed following the Clinical and Laboratory Standards Institute (CLSI) protocol M38-A. ZnOnano was suspended in dimethylsulfoxide (DMSO) and diluted in MEB and distributed into sterile 96-well plates in geometric progression from 2 to 1024 times. Thus, the wells contained 100 µL of MEB with different concentrations of ZnOnano (2.5, 1.25, 0.625, 0.312, 0.156, 0.078, 0.039, 0.019, 0.009, 0.004, and 0.002 mg. mL-1). After this, 100 μL of the respective conidia suspensions was inoculated. The fungicides Prochloraz and Azoxystrobin + Fludioxonil were used as a positive control and DMSO as a negative control. Six replicates of each ZnOnano concentration were performed and plates were incubated for 72 h at 28-30 °C. There was no fungal growth in wells with fungicides. The maximum concentration inhibited better C. gloeosporioides growth. The used ZnOnano concentrations were not enough to inhibit Fusarium growth. These results were confirmed after re-isolation on agar plate growth. The data confirm the high antifungal potential of ZnOnano for C. gloeosporioides, justifying its use as an alternative, or in conjunction with conventional methods used in the post-harvest of papaya fruits, which can be incorporated into packaging or fruit coatings.
Questões (1 tópico)
Pergunta 1